Today it’s carnival footy for the AFLW clash between Footscray and Collingwood. Both teams hyped pre-season as contenders but you sense that supporter tension has eased from the bulldog psyche with that boys’ premiership in the back pack. Up on the hill lots of polite clapping. Heaps of families. Girl gangs – old and young abound. People bring quiches, organic tortilla chips sprinkled with exotic dips and quinoa salads laced with dark beans and avocado while up on the forward pocket mound a family works overtime in their van knocking out bespoke pizza. Beer on offer is boutique – colonial draught – once emptied thoughtfully deposited neatly in the recycle bin. Toddlers help joyously to recycle daddy and mummy’s cans, some resplendent in their team of “choice” 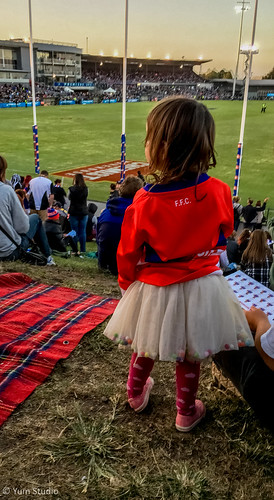 [ These two pictures above kindly supplied by Erin McCuskey ]

No doing your ankle on a stray can these days like the standing terraces of yore. That nostalgia is channelled tonight in the  ragged glory army of pies ex officio cheer squad consigliere who commandeer the goal mouth. “Let her go you mongrel” (which I’m assured is a gender-neutral term) “ball” “you white idiot” “bulldog bullshit” pepper the fringe aspects of their barracking in keeping with the male supporter model. It’s a motley crew among them, perhaps not enough to build a new civilisation out west but it’s the best the pies have tonight. You ponder that this game could be contested by goats in the prison bar guernsey and the cheer squad intensity would remain undiminished. A lot of air has arisen about the lack of scoring in AFLW. Yet its an emerging competition, go back to the history books, for example, the excellent Courage compedium to the very first VFL Grand Final (which didn’t occur until the second year of competition in 1898 ) that elicited the prodigious score line of Fitzroy 5.8 (38) over Essendon 3.5 (23). 1899 saw Fitzroy 3.9 (27) in a nail biter over South Melbourne 3.8 (26). In the augural 1987 Essendon won the premiership for finishing on top of the round robin finals ladder and no Grand Final was played. There is no tape recording of the reaction of the then board, coach and president. So, the scoring will come in time to the AFLW.

Tonight, the Girl Pies having managed only 8 goals in 3 matches then serve up as twilight is defeated by artificial light a four goal 3rd term that sinks the dogs who threaten through the last but can’t close that gap. It’s a first up win for the nascent pies and the girls do the rounds even high fiving this old mugs hand despite the omnipresent hawk beanie. The night ends sadly for Pie rookie Kate Sheehan who debuted at 34 tonight and appears to have done her knee switching direction coming off half back:

This was our dream Dad and we did it. It’s didn’t finish perfectly, but I made you proud and that’s all that matters ? pic.twitter.com/7sPGLf3bns Its my first time back at Western (now Whitten) oval since around 1993, just four years out from its demise as an AFL venue when the dogs decamped to Princes park. Once ensconced there the attempt to add their own décor through a distorted angry dog bark which erupted over the blue blood’s speakers’ royal park side on every Foostscray goal until the AFL put that dog out of its misery for aesthetic reasons.

1993 – Down from Ballarat with my mate we alight at West Footscray station opposite the ground as part of the Victorian Railways footy train offerings. Footscray v Melbourne is a non-descript and uninfluential affair with neither team within cooee of the top eight. We’re witness to a mud drenched oval with minimal highlights to recall except a Maryibinong river mud slaked Jim Stynes playing the wet like it was an uilleann pipe. Even the umpires are smeared in mud like some hapless victims of the type of gastro bug that arrives with barely a knock on the door.

Cans at $2 a pop litter the standing terrace on the city side to which we’ve made a fair contribution. Somehow, we mange to retire to the Sunshine hotel some 5 kilometres away to await the Ballarat train home. After more good cheer there we wrestle with Melton feral teens who sensed my inclemency and bait me into action by taking my prized hawks beanie. A hip flask entertains us for the remainder of the trip.

Back in Ballarat we retire to our regular local musical watering hole where an uncharacteristic 3-piece jazz band play to universal indifference while we double the numbers on admittance. Feeling the beat in my shoulders – one of the few muscles still to be working reliably at this point – I join the band holding my hand out thumbs down and clicking my fingers in a sort of bee bop cliché way. While channelling the birth of cool I’m asked – nay advised – to sit down. I comply – despite being in time and all, but not for long of course. I confuse their next choice with an old favourite of mine as I arise to the stage again proffering a loud yet in tune rendition into the vocal mic of Chet ‘Lets get lost’ Baker’s “I’m old fashioned” which ends up the catalyst for ejection and night over.

Its the last AFLW game this season for the dogs at Whitten oval and the post game fireworks set off the clubs mascots all the way down Gordon Street. 6 Responses to Walking on Sunshine